My continuing adventures with the Whittlesea U3A never ceased to amaze me as I think to myself. Firstly, that fabulous trip to Lakes Entrance back in November. Not to mention the great lunch at the Groove Train and joining in Lilian’s line dancing. I have had so much great fun and met lots of great new friends, I couldn’t have wished for more. But now, on this mild night, the first Thursday in February, here I am with Bryan and Glenise, and we are all attending our fist trivia night with the U3A. At last, I have the chance to put my degree to good use. A test of brains and knowledge.

Like all good bears do, I followed the rules and brought a plate (cheese and bickies) and placed them on our table front and centre. Funny? No-one else had appeared to have brought anything. Boy, these cheese and bickies will be spread thin, I thought. As we were ‘newbies’, the organisers got us together on a new table. We called ourselves ‘New Start’, (sounds like a good theme for a political party) and our line-up was, Wendy, Marion, Gail, Wes, Glenise and Bryan, and, of course, my good self, the Professor. As teams were restricted to 6 players, I thought I might be in a bit of trouble, but an exception was made because of my professor status.

I had proceeded to expel all that obscure trivia I had trapped ‘up top’ that had been gleaned throughout my twenty-seven years at Uni undertaking my Master’s Degree in Absolutely Everything. Grizzly University of Technology was a wonderful learning experience. Five rounds of questions plus a bonus picture round. I was looking forward to that. I love going to the movies.

The night progressed with tension. Progress scores showed most of the teams were very even. It was a hard fought battle.

Some of the questions were real trivia:

All important stuff to know, and fine use of my professorship, if I do say so myself.

Half way through the evening, supper was announced. I thought, my goodness, everyone is going to descend on my plate of cheese and biscuits. Until the trolleys of supper emerged with many plates of goodies. I finally got up and placed my somewhat diminished offering onto the trolleys. After all, it was my first trivia night and I didn’t know all the rules.

What a treat. A cuppa, bickies, cakes and sandwiches. But most of all HONEY Joys. Someone had made something especially for me – YEAH!!

With supper complete, we whipped through the next two rounds and finally got to Round 6, the picture round. I was getting ready to relax after some heavy thinking all night. A couple of good movies, I thought this will be awesome. Then my teammates said, ‘Come on Professor, time to look at these pictures and help us recognise the partial faces of these celebrities.’

I was stonkered. Just as well I had saved our bacon on the first five rounds.

A solid performance in the picture round would give us a great chance to move through the field, but I wasn’t too sure I could rely on my newly formed team’s other six members. After all, they were only humans and probably only spent three or four years at Uni, tops.

After much discussion, I remained silent. After all, I had done enough to get us to mediocrity at this stage, as it was. Much to my surprise, the team came up with ten good answers, eight of them correct.

Lo and Behold! From close to the bottom to equal second in the blink of an eye. Well done ‘New Start’. We didn’t win the perpetual trophy but had a great time. Our team will be staying together and attempting to go one better next time. I can\’t wait until then. Although I did hear whispering between my teammates. Something about only six team members allowed and the Professor needs to try out other U3A fun activities. It sounds like I may be lucky to get a ‘guernsey’ next time.

Thanks to our wonderful quiz-master, Kathy and her offsider Peter. As a an emeritus professor myself, I would love to bestow and honorary degree in triviology on you both.

(Professor Bear’s carer for the evening) 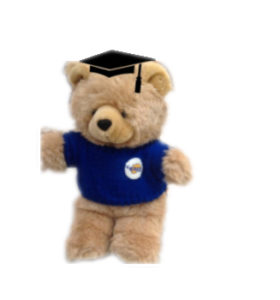