Saturday and my adventurous journey continues. What a breakfast I am having, this Motel is just the best! Eggs, Bacon, cereal, juice, toast I have eaten the lot and then joined everyone on the coach to go to Omeo. 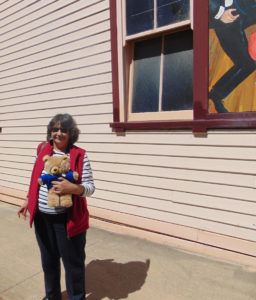 We are going to Omeo and Allen reminds us of the history as he carefully drives us around the winding road following the Snowy River. All around us are the forests of the National Parks and the scenery is superb.

We started out so early and travelled through Bumberrah, where the road was very bumpy and I got bounced around a bit.

It was then onto Bruthen. We enjoyed morning tea at Swift’s Creek where they had to seek me out in the bushes around the steam Tractor where I was taking a rest.  Back on the bus and onto Omeo, passing places called F1000 bend, Tucker, Stoney Creeks and Namestone Point. Who thought up these names?

Stopping next at the Omeo Courthouse we picked up our guide, Jeff Cooper, and eighty two year old volunteer historian who gave us an interesting talk and tour about the Omeo area. The name is derived from the Aboriginal word for ‘mountains’ or ‘hills’ which surround this picturesque town. Since the gold rush in 1851 which saw the mining boom then the gold ran out and cattle and sheep grazing have taken over the town’s major industry.

There is year round tourism and many motor bike riders and coach tours use Omeo as their hub as they ride the Great Alpine Road which links Bairnsdale with Bright and Wangaratta. In 2011 the census noted that Omeo had a population of 487 but Jeff said it is declining.  The gold mining history can be found at the Historic Area where Jeff Cooper assured us that the stories and history of the area are kept safe but as he was the last volunteer he is concerned for the survival of this history.

History of the Oriental Claims in Omeo

We also heard about the local hospital burning down in 1939 bushfires and a murder in the town that made front page news all over Victoria. Black Friday in Omeo

I was put into gaol for not obeying the “Keep Off” signs on the old pieces of equipment. I did not know they were heritage! Whilst in gaol one of my U3A friends stayed with me until my bail was paid.

All then went to the Omeo Caravan Park for a picnic lunch where I had chicken with Richard and Pam. I did a bit of table hopping, trying different tastes of food and then went for a walk with Heather. We found a 1954 Ford Prefect and were able to open the doors, so I hopped in and had my photo taken.  Then off to visit the Cuckoo Clock shop. Whilst I was learning to tell the time it was photo time again, I do not seem to have any privacy! I helped Jodie select a pair of clip on earring, feeling so important that she needed my opinion. I watched some of the group walk around site seeing until we all were called back to the coach.

We stopped at Bruthen for a toilet stop. While I waited for everyone I was getting a bit bored so I climbed onto the Information Sign to get a better look. It has been a long day so I think I will give dinner a miss and go straight to bed!