UNIVERSITY OF THE THIRD AGE

Thank you to the Lalor & District Men's Shed and Whittlesea U3A Inc for hosting me earlier this month to talk about their great work in our community. 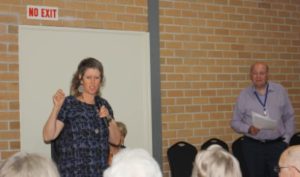 The first guest speaker was Rose Turtle Ertler who is currently preparing to do a community arts project at the City Whittlesea Festival Community which will be at Whittlesea Public Gardens in Lalor, Sunday 15th March. Rose also has a Complimentary Caravan. In this mobile unite, she investigates the power of words through an ongoing collection of audio and handwritten compliments collected from different towns. “Restore your faith in Humanity” and step inside this cosy caravan and “bathe” in a soundtrack of genuine compliments recorded from your local neighbourhood. Relax and enjoy an immersive experience of relentless gratitude and encouragement.  You can read more about the project on her webpage here

The second speaker was John Siekris who represented Telstra. He spoke very passionately about his work as the Area Sales Manager. He mentioned that not every Telstra store has a technical support person and that’s the reason why clients leave the store disgruntled as their questions haven’t been answered. NBN – communication is now internet dependently based; our landline is connected to the internet and when we experience cut-offs, we are without a phone (landline).

The Whittlesea cup logo was won by Donald Clark.

There are still positions available in some classes please check the March new sheet Newssheet02March2020A5(2).pubpub